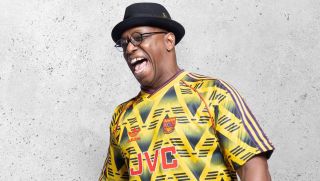 The Arsenal legend Ian Wright has hinted that he thinks the race for top four will go down to the wire as Manchester United compete among their rivals.

Wright, however, thinks Arsenal will pip United to a top four finish.

The retired footballer turned pundit sounded worried by Ralf Rangnick’s side but not enough to drop his Arsenal bias when it comes to predictions, though we are not really giving people enough reasons to say otherwise.

“When you look at Arsenal, they’ve got Spurs, Chelsea, West Ham, Man United soon, so it’s going to be tough,” Wright told the Ringer FC podcast.

“I said at the start of the season, if we could get sixth, I would be so happy and I think Mikel Arteta would be where he should be, in and around sixth-place, and then you start to progress from there.

“When you look at how everyone is doing at the moment, everyone is playing each other. If Arsenal can win games like the Wolves one, I’ll be happy with that.

“I fear for West Ham because they’ve got the seriousness of the Euorpa League coming now and it gets more intense now, they play more frequently and the games are tougher. That’s why you worry for them.

“I don’t think West Ham will be able to sustain it, with the Europa League as well.

“Spurs, I don’t think what’s happening with them and they go to Man City, United, Liverpool and Arsenal soon. Those are tough games for a Spurs who look the way they do right now.

“United have big games too so I can’t call it, I can’t. But when you look at how poorly some teams are performing, it’s interesting.”

The Reds currently lead the way in the race for the final Champions League spot, sitting fourth after beating Brighton 2-0 on Tuesday night, but they must get a run of wins under their belt – starting on Sunday against Leeds United. It would be like a bonus point to see them dive into a relegation scrap as a result, too.

However, United host a two-point lead over fifth-place West Ham, while Arsenal trail by four points. Wolves (6 points) and Tottenham (7) remain in the background.

Arsenal, Wolves and Spurs all have games in hand over United, so we’ll be hoping their inconsistency continues while ours form improves.

Wright added: “I think we [Arsenal] are going to do it. They need four points from their games in hand (against Burnley and Spurs). Can Arsenal recognise that this is it now? This is the season.

“Whatever you say about United, they have the firepower and players and they will start to take their chances and click. That’s what worries me about United.

“But there’s something happening at the club with the in-fighting. If that’s happening, how do you continue to put in the performances to get the top-four? Southampton could have beat them.”