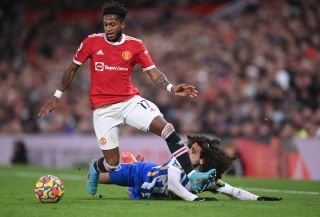 Although Fred has become a mainstay in the Manchester United team, the Brazilian has had to deal with heavy criticism along the way.

The midfielder has explained that the key is to know when to unplug from social media. It’s good to take breaks since Twitter and others have become a toxic environment, but I also hate the fact that people still get away with setting up anonymous accounts to abuse others online.

“Anyone can open an account to send you offensive messages and that’s really saddening,” Fred told Sky Sports in an exclusive interview.

“There are people who can say things, people in the media, and people who talk about subjects they don’t really understand, so you have to prove them wrong.

“But motivation doesn’t just come from others. For me, it was more about doing it for myself. I already know when I can better, so I just needed to stay focused. I grew, I learned a lot and that’s what has got me where I am today, doing very well here. Now I can get with things calmly and do my work in a relaxed way.”

Fred came back into the line-up against Brighton on Tuesday night, after testing positive for COVID-19 and missing two matches.

However, there has been a big difference in Fred’s performances from the Ole Gunnar Solskjaer days, when he was often found at the base of United’s midfield. Now, under Ralf Rangnick, he is now impressing further forward like he does for Brazil.

“I really like playing there,” he added. “With the Selecao, I play in a position which is closer to the opposition goal and the coach here has changed my position too and I really like it.”

Fred is enjoying the change and, on top of that, no United player has made more tackles or recoveries than the Brazil international this season.

His stunning winner against Crystal Palace was an important goal for not only himself but Rangnick, who had just arrived from Lokomotiv Moscow, and it surprised a few fans to see the ball hit the back of the net.

Fred has been impressed by Rangnick’s work to date, calling him a “top coach who has arrived at the club to help us,” before adding: “Ralf just wants me to do my best. He knows the energy I have but also the quality I have.

“Obviously, he has a different way of working from the previous manager, but we have to adapt to that. We have to start again. That’s not easy, but we need to give everything we have in training.

“We have had good results and not-so-good results in the last few games but we’re really happy with the win against Brighton and we now need to keep improving. We’ve got an intense month with a lot of important games, so we need to continue giving our best.”