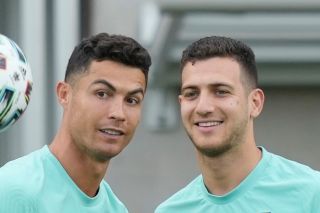 The opportunity to play with Cristiano Ronaldo for club and country doesn’t present itself to many, but Diogo Dalot sure is making the most of it.

Dalot is living the dream – getting his longest run in United’s first team and now a lot of fans prefer the Portugal international to Aaron Wan-Bissaka.

The former FC Porto academy graduate spoke to United’s in-house media back in October about Ronaldo’s return to the club, saying: “It’s another level. Something we can’t describe with words, just to enjoy while we still can and he’s still playing. And I’m very happy that he’s here now.”

Since then we have seen Dalot overtake Wan-Bissaka in the pecking order at United, which was a decision made by new interim manager Ralf Rangnick, who likes his full-backs to get forward and provide crossing.

While that is still an area where Dalot needs to improve, I think he is a lot more efficient in the final third than Wan-Bissaka and we hope that he can finish the season strongly.

In a Q&A with United’s official website this week, Dalot gave some insight into his relationship with Ronaldo.

He said: “Before the games, when we’re at the hotel, I always drink my coffee with Cristiano. It’s been a routine now.

🗣 Diogo Dalot: "Before the games, when we’re at the hotel, I always drink my coffee with Cristiano. It’s been a routine now. Sometimes we have too much time in the hotel, so we get out of the room, just to talk a little bit and try to focus on the game.”

Ronaldo has another year on his contact when the season ends, so Dalot has plenty of time to acquire a stronger taste for coffee!