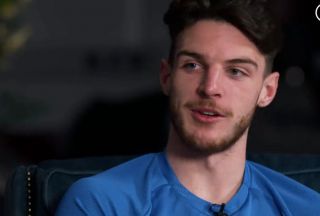 Declan Rice has been asked to name his top 5 current Premier League midfielders, but when speaking about Paul Pogba he spoke about one of the best players he’s ever come up against.

Renowned for adding steel to West Ham’s midfield, Rice plays against top players in the Premier League every week.

It says a lot about the England international as a player that, for two seasons now, he has performed at a very high standard consistently.

You could probably argue that Rice belongs on the same list of brilliant midfielders he named when asked to pick the Premier League’s top five.

And a surprise pick in there too!

Speaking to BT Sport about playing against Pogba, Rice said: “He [Pogba] is honestly in the top three players I’ve ever played against. He’s just so strong, so good on the ball, will take the ball under a crazy amount of pressure and get out of it will a skill, knows how to play one, two touch, can play long passes.:

The England ace added: “My second game for West Ham was actually at Old Trafford, we lost 4-0, I came on with an hour to go. He [Pogba] ran the show, I went into a 50/50 with him and I was like ‘what have I ran into?’ He was rock solid. He was so strong.”

I found it particularly interesting to hear Rice talk about Pogba because there’s a chance at least one of them will be at Old Trafford this summer, and I am not talking about the one currently playing in a red shirt.

The Telegraph claims both United and Chelsea are seriously interested in signing Rice this summer, with one reliable reporter strongly suggesting that the Hammers could look to cash in on their most prized asset.

Let us know in the comments section if you would like United to sign Rice this summer.