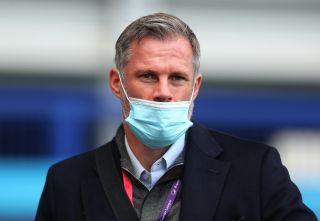 Former Liverpool Jamie Carragher has trolled Manchester United again by claiming Arsenal have a better chance of winning the Champions League this season.

The Reds have struggled to find any consistency this season, but still managed to top their group in the Champions League, with a big thanks to Cristiano Ronaldo for a number of late goals.

In the Premier League, United sit fourth but we’ve a lot of work to do in order to secure a Champions League spot. It’s crucial that we beat Leeds United away from home on Sunday.

United could qualify for the Champions League by winning the competition outright in May.

However, Carragher has suggested we’ve no chance of becoming European champions – it’s worth noting that people were saying the same about Chelsea this time last year.

United face Atletico Madrid in the round of 16, whereas Arsenal are not in Europe this season.

Carragher went on to claim United have a decent chance of knocking Atleti out of the competition, adding: “If we are having this discussion with Atletico as well, it’s the same with them.

“I think they lost in La Liga tonight to Levante, who are bottom of the league.

“When that draw first came out, I was convinced Atletico would go through, now I am not so sure, even with Manchester United still being poor in the Premier League.