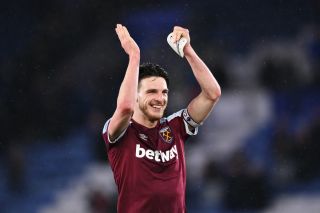 Admirers of Declan Rice could be handed a boost to sign the midfielder after it emerged West Ham are pushing a deal for Huddersfield Town star Lewis O’Brien.

The Express claims West Ham are “desperate” to hold onto Rice but could be willing to reconsider their position if they are successful in signing O’Brien.

From the constant transfer speculation that does the rounds in the English newspapers, as per The Sun, we have reason to believe both Chelsea and Manchester United are serious about their interest in Rice.

Being a United fan, I know that our teams lacks steel and mobility in midfield and Rice has starred for the east Londoners once again this campaign. Throw in the fact he’s a respected England international and came to Old Trafford before putting in an almighty performance just weeks ago.

Rice is probably recognised as one of the Premier League’s best midfielders and, at 23-years-old, it’s no wonder United want him.

However, after being released by Chelsea as a youngster, the West Ham star has made 155 Premier League experience so we would be getting a player with plenty of experience at such a young age.

It is setting up to be a big summer for United’s next manager.