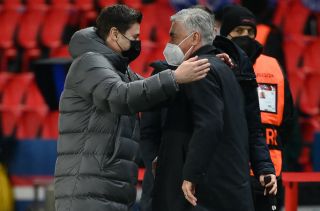 Real Madrid are reporting keeping a close eye on Paris Saint-Germain manager Mauricio Pochettino as they could look to replace Carlo Ancelotti in the summer.

The Argentine has been heavily linked to the job at Manchester United, as per The Telegraph, with the club set to replace Ralf Rangnick as manager at the end of the season, though nothing is set in stone and we could opt for Ajax manager Erik ten Hag instead.

Carlo Ancelotti has not set the world alight since returning to the Bernabeu for a second spell, however, Real Madrid lead the race for the title in La Liga by four points and still stand a chance in the last 16 of the Champions League, despite losing the first-leg 1-0 after an outstanding injury-time goal by Kylian Mbappe.

PSG had appeared to be heading for a frustrating goalless draw in Paris after Lionel Messi’s 62nd-minute penalty was saved by Thibaut Courtois.

According to Sport, Real Madrid could rival United for Pochettino’s signature in the summer. The report also mentions that they have strong interest in Liverpool manager Jurgen Klopp.

Although this news is likely to irk Liverpool fans more than United, it’s hard to imagine Klopp leaving Anfield anytime soon and this could leave Pochettino with a huge decision to make in the summer.

Let us know in the comments section if you want Pochettino or Ten Hag at United this year?