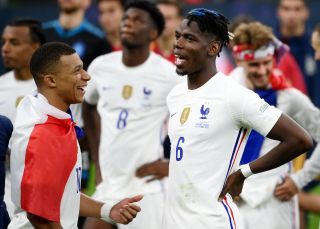 Manchester United fans might want to keep an eye on the Kylian Mbappe saga at Paris Saint-Germain because the situation may influence other moves.

The Independent claims the PSG star is considering a new proposal from the Ligue 1 giants and it could make the 23-year-old the world’s highest-paid footballer.

Mbappe could earn a basic wage far in excess of £500,000, and closer to £1m, plus is it understood that Real Madrid would not be able to match such an offer.

This could mitigate the offer PSG were preparing for United midfielder Paul Pogba since the French side were reportedly willing to offer Pogba up to €600,000 a week.

Miguel Delaney of the Independent goes on to explain, “but that was in part because they want a French – and preferably Parisian – star at the centre of their team.

“That would not be so necessary if Mbappe stayed at the Parc des Princes.”

Exclusive: Mbappe considering new PSG proposal, to be by far best paid player in the world

– would be well in excess of £500k a week
– scheduled meeting after Madrid yesterday
– staleness of Madrid pointed out
– could affect huge PSG offer to Pogbahttps://t.co/nok1DnA8DD

It’s also worth noting that on Wednesday night it was leaked that Pogba was open to offers from other Premier League clubs.

It goes without saying that Mbappe would be a better signing than Pogba – and both are set to become free agents in 5 months.

The report also relays claims that Florentino Perez was “furious” with the nature of his team’s performance and will consider replacing Carlo Ancelotti with Mauricio Pochettino as manager at the end of the season.

Mbappe’s deal expires in the summer, so there could be a quick solution if PSG get their way.