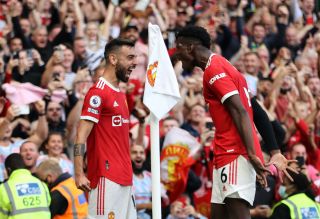 Bruno Fernandes and Paul Pogba are two fantastic footballers. When it clicks for them both on the pitch at the same time, it can make for glorious viewing. It’s sheer entertainment.

They were excellent against Brighton & Hove Albion on Tuesday night, as Manchester United won 2-0 as the pair linked up for the match winner in stoppage-time.

Cristiano Ronaldo opened the scoring, but Bruno Fernandes sealed the win thanks to a Paul Pogba free kick, when he sent the Portuguese midfielder through on goal.

According to WhoScored, the United pair have managed to form the most productive assist-to-goalscorer combination in the Premier League this season.

🤝 Paul Pogba has directly assisted four goals for Bruno Fernandes in the Premier League this season, the best assist-to-goalscorer combination in the division #MUNBHA pic.twitter.com/VQnwKkMfiW

The bromance is real: #Brogba

Fernandes has eight goals in the Premier League this season and he will soon hope to be on double figures, but Tuesday’s strike was his first goal in six games across all competitions.

Having this pair click between now and the end of the season could be the difference in the race for a top four finish.