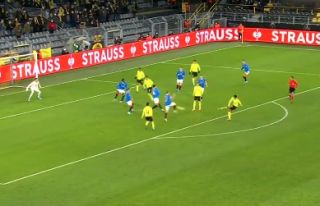 It’s been all Rangers in what has been a surprising game this evening, but Manchester United transfer target Jude Bellingham is trying to rally the troops after pulling a goal back against the Scottish side.

We are keeping a close eye on the game tonight to see whether Amad Diallo makes an appearance from the bench, but also to check in on Bellingham, who really is a magnificent midfielder.

Unfortunately for Bellingham and his team-mates, the goal didn’t drive enough motivation to prevent Rangers from going up the other end and scoring a fourth goal just four minutes late.

As you can see from the goal below, he takes his goal extremely well, curling it in from the edge of the box. Bellingham had to place his effort perfectly to get the ball in behind a crammed penalty area.

TWO GOALS IN TWO MINUTES TO START THE SECOND HALF. THIS GAME. 🤯 pic.twitter.com/MrKu5rDyWS

Footage courtesy of DAZN and CBS