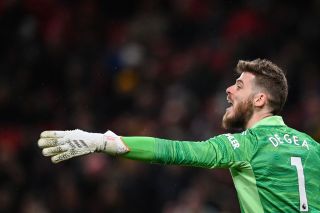 David de Gea is well aware of Manchester United’s rivalry with Leeds United and he is aiming to mark his first appearance at Elland Road with a win on Sunday.

Of course, Manchester United are trying to build momentum in their charge for a top-four spot – because I don’t think we’ll be going all the way in Europe this season, though that would be a nice way to qualify for the Champions League next season.

De Gea has been a standout performer in a disappointing season at Old Trafford – but not without faults, as elements of his game come under the critical microscope. He is very much in line to win a fifth club’s player of the year award since joining from Atletico Madrid in 2011.

The Premier League Player of the Month for January produced a top save in United’s 2-0 win over Brighton on Tuesday night. Now he wants his team-mates to strengthen their bid for a top-four finish by beating Leeds on Sunday.

“I know it’s a massive rivalry between the teams,” De Gea told the PA news agency, as per The Independent. “It’s going to be a tough game, especially away against Leeds: good team, difficult team, different team.

“But we have to win the game as well to be in the top four and hopefully we can go there and win.”

De Gea adds that everyone is focused on the Leeds United clash and he hasn’t even thought about his Atletico Madrid reunion next week.

“Yeah (it’s a special match), but my mind at the moment is just about Leeds,” the goalkeeper said.

De Gea went on to explain the importance of qualifying for the Champions League, but he wants United to be competing for titles… Like us all.

“We should be fighting for more better things than we are doing at the moment,” he added. “But it’s realistic that we are fighting for the top four. This is the objective. Finishing in the top four is very important for us.

“We will go game by game giving 100 per cent every game and try to as much games as we can. There’s many, like four or five teams, fighting for the same place.

“But yeah, at the end it’s more about us than about the other teams. Be focused on what we can do and what we can improve and show on the pitch.”

Under Ole Gunnar Solskjaer, United would tend to sit back and hit Leeds United on the counter-attack. It worked wonderfully because Marcelo Bielsa’s side come straight out of the traps like wild dogs – for 90 minutes – leaving a number of holes in their defence.

We suspect United will have a different approach to the game this weekend, and we could see a lot of end-to-end football if the Reds struggle in midfield.