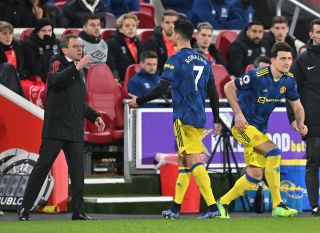 There appears to be a power struggle at Manchester United.

Well, that is if you believe the latest damning report from The Mirror that claims Harry Maguire and Cristiano Ronaldo have had a row over the captaincy role at Old Trafford.

According to David McDonnell, the two stars are ‘embroiled in a power struggle’ over who should be the captain for the rest of the season, after Ralf Rangnick played down speculation that he would strip Maguire of the captaincy.

This comes a day after Marcus Rashford rubbished claims made by a German reporter on Twitter, a move that was hailed by a Sky Sports News presenter.

The England international was made skipper by Ole Gunnar Solskjaer – less than a year after joining the club from Leicester City.

Rangnick is only manager until the end of the season and I can’t see him make any drastic changes to the captaincy, unless Maguire pulls him aside and says the status has done him more harm than good.

The next manager will have a decision to make.