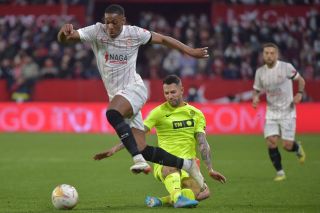 Spanish football’s best-known sporting director Monchi has given an interview to an English paper, where he talks about new loan signing Anthony Martial, a move which down as a hit with Sevillistas.

Martial left United in January to join Sevilla on loan and Monchi knew he was taking a chance on a player who had struggled of late in the Premier League. He calls himself the most daring director of football out there and some United fans will feel they understand why after the Martial deal.

The Spaniard has told The Times that he has confidence in Martial, saying: “When a player has the technical, tactical, physical qualities, what you have to do is touch the perfect spot for these qualities to reappear. And we think we’re capable of finding this spot.

“Possibly it could mean more affection, more support, more trust; speaking more to him, for his family to feel settled, for him to feel important. There’s not one model for every player – everyone has their needs.”

I would like to think that down the years United have tried every trick in the book on Martial. It would be a shame (for us) to see him turn into a completely different player while away at Sevilla, though that could help increase his market value for the summer transfer window.

Monchi has also been impressed by what he’s seen of Martial at Sevilla since the move was made official, two weeks ago, with the Frenchman creating an assist in their 2-0 win over Elche.

“In these two weeks he’s been here, what I see is happiness,” Monchi said.