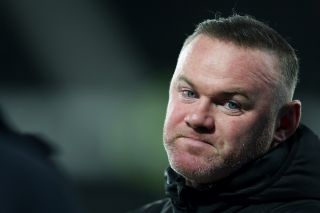 Like any footballer who has had the pleasure of playing for Manchester United, Wayne Rooney dreams of one day leading from the dugout at Old Trafford as manager.

The 36-year-old, who is Manchester United’s all-time record goalscorer, is doing a fine job in difficult circumstances in his first role as manager, with financially troubled Derby County fighting to stay in the Championship.

Derby have been dealt point deductions, but Rooney has kept hopes alive at Pride Park Stadium. They could stay up with Rooney’s luck in terms of results this season, but you may also want to take him up on a trip to Amazon Slots if he’s to get super lucky.

Rooney recently turned down the opportunity to speak to former club Everton about succeeding Rafael Benitez – before Frank Lampard got the job – but the United job this summer is likely to come too soon in the former England international’s career as a manager.

He said: “I didn’t go for the [Everton] interview, which I was asked to go to. I’ve always been one who likes a challenge and is willing to put the work in and fight.

“I’ve stood in front of my players and told them, ‘I’m with you, trust me, I’m fighting with you’… what type of person would I be if – at the first opportunity – I left them?

“True to my word, I am fighting for the club. I am trying to get us out.

“And then Everton, Manchester United – two clubs close to my heart. Of course, one day I’d love to manage either of them clubs.”

Rooney’s loyalty to Derby County should be admired. Far too often do we see inexperienced managers bite off more than they can chew. Wazza is right to learn his trade at a struggling Championship side, especially when he could form a miracle ending to a challenging campaign.

Nobody gave Derby County a chance… only Rooney.

Speaking at the premiere of ‘Rooney’, the Amazon Prime Video film telling the story of Wazza’s life, he spoke about United’s struggles on the pitch this season.

“In my opinion, what they need – whether it’s Rangnick or whether it’s a new manager at the end of the season – is someone to go in and have time. Have time to build a squad.

“I think the next three years certainly is going to be very difficult to win the Premier League.

“They need to give someone that time to build a squad and then really challenge for the big prizes, which a club like Manchester United needs to be doing.”

Moreover, according to reports, Rooney did not want Sir Alex Ferguson to feature in his new documentary. Fans were stunned not to see Ferguson make an exclusive appearance in the film, despite being a huge part of Rooney’s career, working together for nine trophy-laden years.

Jose Mourinho and David Moyes feature in the documentary – but not Ferguson.

Amazon released a similar documentary about Ferguson last year and there has been reports that he was more than willing to feature in his former player’s film.

The Sun, however, claims Rooney declined the offer and his production team chose to use archive footage of Ferguson instead. It is believed that the Scot was invited to the film’s premiere last week but couldn’t attend due to other commitments.

It is well known that the pair clashed during their time together at Old Trafford, but it is believed that they have settled their differences.

Rooney made it clear he wanted to leave United in 2010 following the sales of Cristiano Ronaldo and Carlos Tevez but has since revealed his regret at handing in a transfer request.

“The relationship with Sir Alex took a little bit of a hit because of me trying to think of the bigger picture,” Rooney said in November 2010.

“Obviously, as he told me, it was none of my business. I think it’s good [the relationship with the fans]. It [also] took a hit in 2010 when I asked to leave the club, which I get.

“I understand the frustration from the fans over that. But I think, again, there were other things going on and I had frustrations myself with the way the club was going.

“We’d sold Tevez and sold Ronaldo and, when United asked me about and offered me a five-year deal, it was going to be my last contract really in terms of a big contract where I was coming into the peak of my career.

“I really wanted assurances as we were selling these players… it was all quick and something I regret now.”