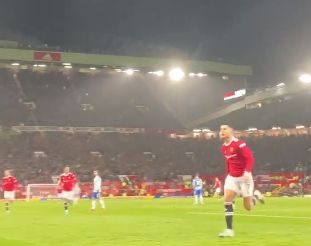 Manchester United star Cristiano Ronaldo ended his six-game goal drought in style with a smashing effort against Brighton on Tuesday night. An alternative view has captured the true genius behind the Portuguese attacker who made minced meat of the defenders that stood in his way.

Ronaldo put the Red Devils ahead in the early stages of the second half.

The 37-year-old rolled back the years to silence his critics with his first goal of 2022, ending a six-match run without hitting the back of the net.

After being criticised for recent performances, Ronaldo picked the ball up 25 yards from goal and ran straight at the defence before skipping past challenges and unleashing a lethal strike past Robert Sanchez.

Nobody had a bad word to say about him last night.

In fact, Ralf Rangnick said it was Ronaldo’s best performance in weeks!

The aim now is to get back on the scoresheet against Leeds United to ensure United get all three points to bolster our Champions League chances.