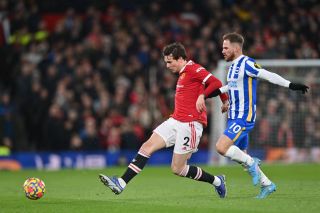 Goals from Bruno Fernandes and Cristiano Ronaldo sealed the win for Manchester United against Brighton, but it was far from a straightforward night despite the scoreline reading 2-0 in our favour.

The Reds had to call upon goalkeeper David de Gea to keep the team in the game, with a stunning first-half save being one of the talking points from last night.

However, Ralf Rangnick had to make a last-minute change to his defence before kick-off when Raphael Varane began to feel unwell. Victor Lindelof, who had originally been listed as a substitute for the match, was drafted into the team as a result.

Lindelof has revealed that he only had 15 minutes to prepare after finding out that he was in the starting line-up.

The defender told club media (via ManUtd.com): “I would say 15 minutes or so before the warm-up but I mean, before every game, even if I am playing or not, I am always preparing in the same way.

“I am always ready for whatever so yeah, today they told me I was going to start late on but, like I said, I’m always ready and I’m happy to help the team.”

One source has told Stretty News that Varane was feeling ill at the team hotel on Tuesday, so Lindelof would have known that he’d a chance of starting the game.

Lindelof added: “Usually I am not a nervous guy. I always trust my abilities and I know what I can do on the pitch. I prepare the same way even if I am playing or not so I’m always ready to play.”

He also spoke about searching for that second goal, which United have struggled to do in games lately.

“Of course, when it is 1-0, anything can happen in football, even when they have one man less,” Lindelof said.

He added: “We know the game, we know the score is 1-0 but we just have to do our job and stay focused, but we just try to manage the game and, like I said, go for the second goal.

“We managed to get it late, hopefully, in the next game, if it is the same type of game, we get it earlier.”