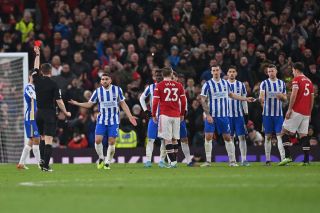 It has been Manchester United could face a Football Association charge after some of our players surrounded referee Peter Bankes on Tuesday night.

Well, according to The Mirror, it may result in an FA charge.

The Reds were playing host to Brighton & Hove Albion in the Premier League when the referee initially issued a yellow card to Lewis Dunk after he had pulled down Anthony Elanga.

This saw the United players rightly react furiously — to let Bankes know that he had made the wrong call.

The protests, led by skipper Harry Maguire and Bruno Fernandes, were followed by VAR intervention when Jarred Gillett told the referee to go and look at the pitch side monitor.

That was when Bankes upgraded Dunk’s card to a red and Brighton were reduced to 10 men.

While Bankes should be forgiven for thinking that Brighton’s Adam Webster was a covering defender, he was actually miles away, and it was a clear goalscoring opportunity for a speedy forward like Elanga.

You see referees engagement with players every week and sometimes it is bound to get heated.

I really didn’t see anything wrong with the protests last night, plus Fernandes was dealt with as Bankes issued a yellow card in the aftermath.