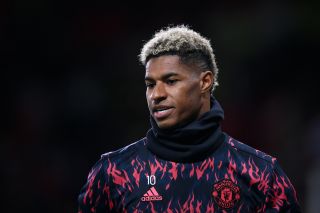 Marcus Rashford has responded to claims suggesting that he is among a couple of Manchester United players ‘irritated’ by Cristiano Ronaldo, with the media doing its upmost to create divides to fit their preferred narrative.

When we initially reported on the news, provided by Christian Falk on Twitter, we warned that the German reporter was hit and miss when it came to stories on Manchester United. Without trying to sound disrespectful, you shouldn’t believe everything you read, in other words.

Falk tweeted: “TRUE. The English players like Harry Maguire, Marcus Rashford & Co are irritated that Ronaldo wants to lead the dressing room with his own clique. There is a risk of split in the team.”

This was pure speculative at best, and United star Rashford didn’t waste any time when it came to squash the claims, by quoting Falk’s tweet and adding: “Are we just making it up as we go along now then? Please stop looking for divides.”

Are we just making it up as we go along now then? Please stop looking for divides. https://t.co/gVwQuYMwx4

It feels like a couple of journalists are all digging for that big story on Ronaldo – showing how he is the problem at United and pretending like we didn’t have any before he arrived in the summer – and they won’t stop here.

Rashford did the best thing by coming out and making his side clear because these news drops spread like wildfire on social media.

Anyhow, back to the football — Ronaldo has been involved in twelve goals from his 21 Premier League outings this season. He will be looking to make it 20 goals by the end of the season.

United face Leeds United next in the Premier League on Sunday.

I should add this is a much better way to use of social media from a player’s perspective than we’ve seen recently from the likes of Anthony Martial and Jesse Lingard.