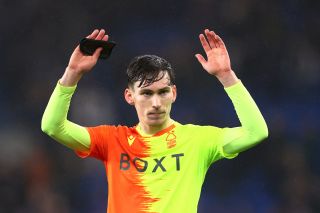 James Garner is having a brilliant season on loan at Nottingham Forest and Manchester United are rubbing their hands together prior to his return to Old Trafford at the end of the season.

The midfielder is tipped for big things at United and has been showing his worth in the Championship this season. Forest also find themselves on a cup run after knocking both Arsenal and Leicester City out of the FA Cup, with Garner starring in both matches.

However, Garner initially impressed Forest last season on loan and they decided to take him back on a season-long arrangement.

Thus far it is not only going United’s way, but Forest are delighted to have a player of Garner’s pedigree as they push for promotion to the Premier League.

Arsenal legend Martin Keown even suggested that United should call Garner back “quickly” after watching him come out on top against Premier League opposition in the FA Cup, as per The Metro.

Meanwhile, former Man City man Trevor Sinclair has compared him to United legend David Beckham due to his incredible ability to take free-kicks.

Forest boss Steve Cooper has weighed in by revealing the turning point in Garner’s level of performance this season.

“Jimmy has been a really strong performer for us, probably since he came on against Reading,” Cooper told the Nottingham Post.

“He came on in the Reading game away from home and had a really good impact, nearly scored and set up a chance for Lewis Grabban.

“Since then, I think he’s found another level. What’s important for him — and we’ve spoken about this — is that he doesn’t drop any standards and continues to improve.

“The only way to do that is by continuing to perform well in the next game, and do even better.

“He’s in a good place, Jimmy. But he’s got to work even harder to, at minimum, stay where he is, but hopefully keep improving.

“He’s trained really well. He’s really caught the eye in training with his application and his attitude.

“He’s a winner, Jim. He’s a real winner. He wants to do well. He’s just got to keep it going. There’s a long way to go. You’re nowhere near calling it a full season yet – there’s a lot of football to be played.

“He’s got to keep his head down and keep going.”

Garner is under contract at United until 2024 with the option of an additional year.