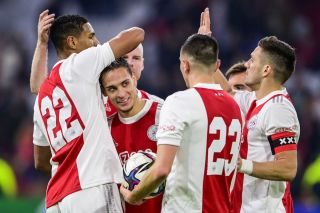 Manchester United are reportedly one of the clubs interested in a potential transfer for Ajax star Antony, who has impressed for the Dutch giants this term.

The 21-year-old has chipped in with 11 goals and eight assists in 25 games across all competitions, and speaking to Good Morning Oranje, Ajax manager Erik ten Hag admitted it will be difficult to keep him beyond the summer.

“From a sporting point of view, it is clear that he is an incredible talent,” Ten Hag said, as quoted by The Sun.

“He is going through an incredibly beautiful development.

“Especially if we perform in the Champions League, then it is clear that he will come into the spotlight and be interesting for a lot of clubs.”

Antony joined the Eredivisie club in 2020 and has since won the league title as well as the KNVB Cup.

According to 90min, Manchester United are determined to sign Antony at the end of the season.

It is also stated in the article that Liverpool and Chelsea are interested in the player.

The Scousers could use Antony as a replacement for Mohamed Salah, after recently signing Luis Diaz to presumably become Sadio Mane’s understudy.

Meanwhile, Chelsea could surely do with an upgrade on Timo Werner.

Time will tell but we don’t recall 90min being first to many stories on United.