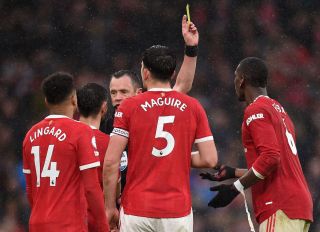 The FA has charged Manchester United for failing to control their players against Brighton in the Premier League, on Tuesday night.

Although United won the match 2-0, there was some controversy when Bankes issued Lewis Dunk a yellow card for denying Anthony Elanga a goalscoring opportunity by pulling him the young attacker to the ground.

The players were then seen surrounding referee Peter Bankes.

Bankes thought that Adam Webster was covering for Dunk, but he was nowhere near, and Bruno Fernandes led the fury as he received a yellow card for his protest.

An FA statement read (via Manchester Evening News): “Manchester United FC has been charged with a breach of FA Rule E20.1 following its Premier League game against Brighton & Hove Albion FC on Tuesday [15/2/22].

“It is alleged that Manchester United FC failed to ensure its players conducted themselves in an orderly fashion during the 53rd minute, and the club has until Monday [21/2/22] to provide a response.”

What I find annoying about this situation is, the United players were right – and their protests eventually led to VAR intervention, which saw Bankes upgrade the yellow to a red card.