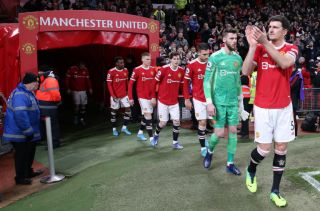 Much is made of Ralf Rangnick deploying high-pressing tactics and how deploying a high defensive line for his Manchester United team could create more problems for skipper Harry Maguire.

However, the statistics we are about to show you shine Maguire in a positive light following his performance against Brighton in our 2-0 win last night.

As shared on Twitter by @theutdjournal, Maguire won all of his aerial duels against the Seagulls and had a 90% pass success rate.

The skipper made 57 touches, 5 clearances, 4 interceptions and as many recoveries throughout the game.

Few United fans would have been disappointed if Maguire had been dropped for last night’s game, but he stood tall alongside Victor Lindelof, who replaced Raphael Varane in the starting line-up due to the Frenchman feeling ill prior to kick-off.

Question marks will will hover over Maguire of course. The weekend’s match against Leeds United will be another test before the tougher games come United’s way.