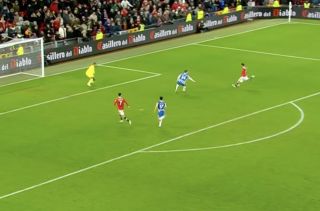 The Red Devils, who hosted Graham Potter’s Seagulls, would have come into Tuesday’s game desperate to claim all three points after back-to-back 1-1 draws against Burnley and Southampton.

Despite the pressure on Ralf Rangnick to get a result, United put in a decent performance and following goals from Cristiano Ronaldo and compatriot Bruno Fernandes, the Red Devils were able to improve on their fifth-place position.