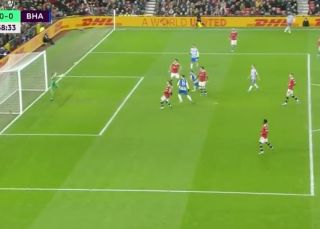 David de Gea produced a fantastic acrobatic save to deny Brighton’s Jakub Moder in the first-half.

It is 1-0 with under 20 minutes left on the clock at Old Trafford and Manchester United lead thanks to a Cristiano Ronaldo opener, which came after the break.

United also have De Gea to thank for keeping us in the game after pulling off an amazing save to stop the Seagulls taking the lead.

De Gea has largely been viewed as one of United’s best performers this season, winning three Player of the Month awards, and he showed his class to deny a powerful Moder header inside the box.

The Spaniard had to make a full stretch to reach the ball.

United are looking to bounce back to winning ways tonight after 1-1 draws against Burnley and Southampton in recent outings.

We hope they can hold on and make it 2-0 before full-time.