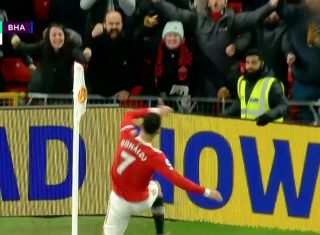 Cristiano Ronaldo is back on the scoresheet!

The build-up play was scrappy but Scott McTominay won back possession to put the Reds on the front foot.

Cristiano Ronaldo then picked up the ball before driving forward and sticking the ball into the back of the net.

After going six games without a goal for United, Ronaldo has set the record straight but it only matters if United can get the job done with three points.

Minutes after Lionel #Messi's penalty miss… Cristiano #Ronaldo did this. 😳

What a goal from Cristiano Ronaldo 🔥 pic.twitter.com/kvgmkqr3Og

The Portuguese superstar silenced his critics by opening the scoring against Brighton, who are now down the 10-men after Anthony Elanga was fouled when clear on goal, just minutes after United took the lead.

The question is whether United can hold on to their lead after dropping points in their last two league games after scoring the opening goal.