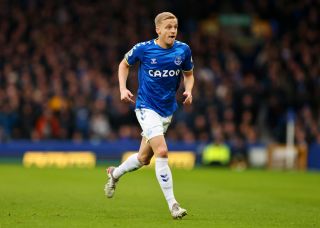 Rio Ferdinand apparently has the inside track at Everton after revealing what people at Goodison Park are saying about Donny van de Beek following his loan move in January.

Everton manager Frank Lampard was left impressed by the Dutchman’s performance in his first home start at the weekend against Leeds United. The Netherlands International signed for the Toffees on deadline day after struggling to break into the Manchester United first team under both Ole Gunnar Solskjaer and Ralf Rangnick.

With a move to Everton, Van de Beek was handed the opportunity to prove his critics wrong, and hopefully he comes back to United a better player.

Ferdinand claims to have spoken to ‘a few people’ in the Everton camp about Van de Beek’s arrival and they all sound impressed by his quality in training.

“I’ve been speaking to a few people at the club and they’ve said that he’s gone in there and lifted the levels, training wise,” Ferdinand said on his podcast Vibe with FIVE.

“[He’s a] great lad, first and foremost, but you can see. A lot of them are going, ‘Wow, he’s this good, they must be unbelievable at Manchester United if he can’t get in’.”

The Mirror recently cited reports that suggested Van de Beek was not suited to the physical demands of the Premier League following inspection at Carrington since he joined the club.

At least now it feels like Van de Beek is finally somewhere where he is appreciated, like he was back at Ajax!