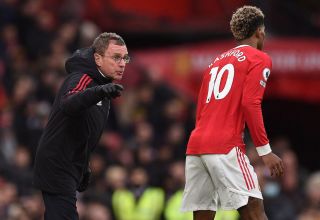 The game which kicks off at 8:15pm won’t be televised live in the UK, but the biggest question for United is whether we can get back to winning ways after three very disappointing results on the bounce – against Middlesbrough, Burnley and Southampton.

A trio of soft punchers! If United keep up this level of form, we won’t be in the Champions League next season, so Rangnick must make the right decision with his team selection later on.

With the fixtures coming thick and fast, Rangnick has refused to rule out of the prospect of rotating his side in a bid to keep the players fresh.

“Yes, it’s possible that we need to rotate, maybe even for tomorrow’s game,” Rangnick told United’s official website on Monday.

“In some positions, we could do with some fresh legs, some fresh energy. We have the next game coming up at Leeds, another intense away game, and then in the Champions League against Atletico Madrid and then Watford.

“We have quite a few games coming up, every three or four days, and that’s why it’s good for me as manager that I have enough players, two players for each position, in order to give some players a rest and others a chance to perform.”

This means we could see Anthony Elanga, Victor Lindelof and maybe Alex Telles all start this evening. On top of that, at least two of those made our predicted XI for this match.

Brighton have never won a league game in Manchester and they will fancy their chances of providing an upset tonight, especially after watching United struggle in recent matches against lesser opposition.