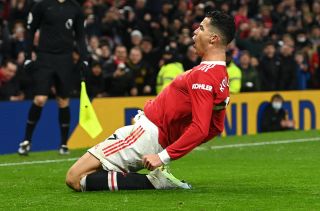 Manchester United interim manager Ralf Rangnick believes Cristiano Ronaldo produced his best performance for weeks against Brighton tonight, as the Reds climbed back into the top four after winning 2-0 at Old Trafford.

Ronaldo scored his first goal in seven games with a superb strike at the beginning of the second half.

It was Ronaldo’s 15th goal of the season and he was unlucky not to add to his tally later on in the match.

The interim manager was happy with his talisman’s performance, saying (via Manchester Evening News): “An amazing goal. Not only an important one but an amazing goal and I think overall it was a good performance by Cristiano.

“Energetically, he was trying to help teammates and I think in the last weeks definitely the best performance by him and a very, very important goal for us.”

Not only did the goal give United the lead 51 minutes in, Brighton had a man sent off minutes later, as the Reds finally took advantage of scoring first – something they failed to do against Middlesbrough, Burnley and Southampton.

And, after ending a 6-game goal drought, Ronaldo will be ready to continue his scoring against Leeds United on Sunday when Rangnick’s side look to make more ground in the race for top four.

Having Ronaldo back amongst the goals should give us all more confidence moving forward.