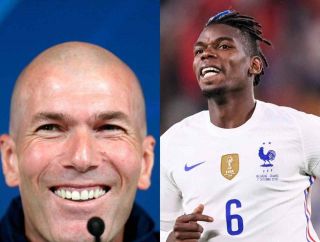 It is widely expected Paul Pogba and Zinedine Zidane will be at Paris Saint-Germain in the summer.

That is according to the Independent, along with suggestions that PSG star Kylian Mbappe will be the subject of conversation when the Ligue 1 giants take on Real Madrid in the Champions League tonight.

Since returning to the United team two weeks ago, Pogba has performed well but an exit still appears to be the cards, with the midfielder basically playing for a transfer when his contract expires in 5 months.

The Independent suggest Pogba will be on his way to PSG which means United are bound to lose the French star on a Bosman.

PSG will be hoping Pogba can replicate his performances from his Juventus days or, even better, in a France shirt as he’s proved himself on the international stage as a World Cup-winner in 2018.

Playing in Ligue 1 should be easier because the game is played at a slower pace and is less competitive than the Premier League. The biggest pull factor for Pogba will be playing under Zidane, should he replace Mauricio Pochettino in the summer.

It remains to be seen who United see as a fitting replacement for Pogba but one RB Leipzig midfielder’s name is doing the rounds.

Christopher Nkunku, who can also play on either flank, is one of the latest names to be linked with a move to Old Trafford in the summer.