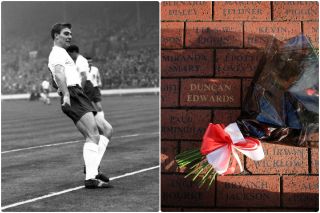 An array of items belonging to Duncan Edwards, who passed way after the Munich air disaster in 1958, are being auctioned by the family of his late fiancé.

Edwards was just 21-years-old when the plane carrying the Manchester United team crashed on the Munich-Riem airport runway in freezing conditions.

The players along with supporters and sports reporters were returning from a European Cup match in Belgrade. A total of 20 people died at the scene, but sadly Edwards passed away 15 days later.

Edward’s finance Molly Leech was only 22 at the time and she died in 2004, aged 68. Her daughters, who remain anonymous, have now decided to sell more than 40 items.

The collection includes photographs as well as Edwards’ overnight bag and football programmes. On top of that, they have discovered two letters from Edwards to Molly during his national service, where he refers to her as “Dear Molly” and “Dear Pet”.

The daughters as quoted by ITV, saying: “Our mother, Molly, first met Duncan one Saturday evening in Ringway Airport, which is now Manchester Airport.

“In the 1950s, many people would go to the airport to watch the planes! She came from Manchester and worked in an office there, they were very much in love but very private and ordinary people.

“They enjoyed playing cards and tennis, he liked fishing – she always spoke about him with great affection.”

They added: “I just can’t imagine what my mother must have gone through when she had to go to Munich, it was such a sad and awful part of her life – she was just 22.

“She died in 2004, at the age of 68, our father died three years ago, and although we did keep in touch with, and visited Mrs Edwards, Duncan’s mother, we are one step removed from the story and we would like his legacy to continue.”

The items are set to go on sale at Graham Budd’s sports memorabilia in Nottinghamshire – held online at 8 and 9 March.