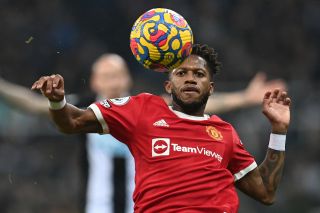 Manchester United welcome Fred back into the starting XI tonight against Brighton.

Ralf Rangnick’s side will be looking to get back to winning ways in the Premier League after dropping points in our last two matches.

However, in our last three matches, United have thrown away 1-0 leads against Middlesbrough, Burnley and Southampton — and tonight we want to see the lads set the record straight with three points.

In facing Brighton, United are up against an in-form side that have not lost in their last seven league outings, so we are very much up against it with our players low in confidence.

Introducing your United line-up to take on Brighton! ✊🔴#MUFC | #MUNBHA

Paul Pogba being benched will raise eyebrows but it doesn’t surprise us to see Fred back in the starting XI.

The manager has also stuck with Harry Maguire at centre-back, despite recent performances, and Victor Lindelof is named on the bench.

Let us know in the comment section if you think the Reds are fielding a strong enough side to beat Brighton, like they did against Burnley and Southampton but only managed a point from each game.

One response to “Manchester United XI vs Brighton: Fred returns to add energy in midfield”