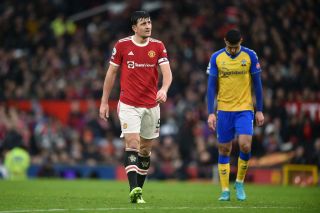 Manchester United interim manager Ralf Rangnick has responded to claims he should drop Harry Maguire and strip the England international of his captaincy role.

Maguire has come under immense criticism this season – even before Ole Gunnar Solskjaer’s sacking in November – but Rangnick’s change in tactics to make us a more high-pressing team do not appear to have played to the strengths of our captain.

The centre-back looked a lot better when United sat back with two holding midfielders to hit teams on the counter-attack, but it seems like those days are gone, with United trying to play a more aggressive brand of football.

Some supporters have called for Rangnick to strip Maguire of the captain’s armband, though I’m not sure we have many leading candidates to takeover. We also suggested that Victor Lindelof should start ahead of him in tonight’s league clash against Brighton.

Speaking ahead of United’s home match against Brighton on Tuesday night, the boss said: “I think when he came back after his injury he did extremely well. He had a very good performance, a very good game against West Ham.

“In the past two games, yeah he had some weaker moments, against Southampton and when we conceded the goal at Burnley, but he’s our captain and I don’t see any reason to change that.”

However, Maguire at Euro 2020 was superb, and it wasn’t the first international tournament that he impressed in, as England reached the final only to lose against Italy.

Rangnick added: “He’s a player who has to develop, get better, like all the other players.

“The way that we are playing now is new also to him because in the English national team he was used to playing in a back three and here at Manchester United, in most cases a back four, but still not being as proactive, not with that kind of rest defence always being on the front foot when we are trying to defend.

“This is something also new to him and it will also take some time for him to get used to that, to get adjusted to that.”