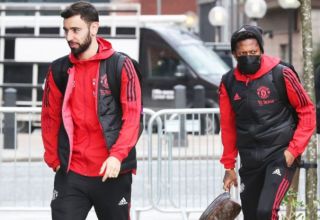 Fred was pictured arriving at the team hotel ahead of Manchester United’s league encounter against Brighton & Hove Albion at Old Trafford.

The 28-year-old missed United’s last two matches after testing positive for COVID-19 but he made our predicted XI for tonight’s game.

The Reds have missed his energy in games, especially in the second half.

Speaking at his pre-match press conference on Monday, interim manager Ralf Rangnick confirmed Fred’s return to the side, saying: “Yes, Fred will be available again and will also be part of the group for tomorrow.”

On top of that, Rangnick hinted that he will stand by skipper Harry Maguire, who has come under increasing criticism for his performances of late.

The boss will also have plenty of attacking options available to him, despite Edinson Cavani being ruled out with injury.

Photographs courtesy of MEN, via @utdreport

Nemanja Matic is also out with a shin injury.