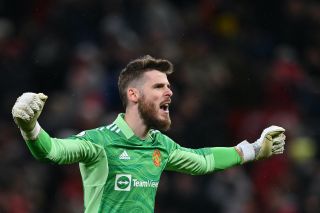 The Spaniard played a big role in Manchester United’s 2-0 win over the Seagulls, making a terrific save to deny a powerful Jakub Moder header in the first-half, and he has equaled club legend Peter Schmeichel in the Premier League clean sheets table.

With De Gea still only 31-years-old, it seems there’s a good chance he will surpass Schmeichel’s clean sheet record in all competitions, which stands at a whopping 180 clean sheets from 398 appearances.

United take on Leeds United in the Premier League on Sunday when De Gea will be aiming to keep another clean sheet.