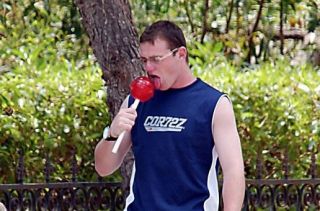 Wayne Rooney has always struck me as a funny individual and on Valentine’s Day he has shown that he can also enjoy a little laugh at his own expense.

The pair have been married since 2008 and together they share four sons.

Rooney took inspiration from an old, unflattering photo of himself licking enthusiastically on a giant lollipop, while Coleen walks on with a smile on her face.

I’m not sure about the short short and sleeveless t-shirt combo either.

A new documentary titled Rooney, was released on Amazon Prime Video on Friday, and sees Wayne and his wife reflect back on their 20-year relationship.