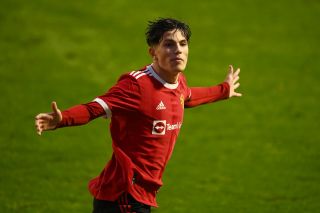 The draw has been made for the UEFA Youth League round-of-16.

Manchester United U19s were drawn against Borussia Dortmund and the young Reds could meet either Real Madrid or Atletico Madrid in the quarter-finals, as per UEFA.

Neil Wood’s side will continue their UEFA Youth League journey when they welcome the young German side to Old Trafford in the round-of-16.

The one-legged tie will take place on March 1/2, 2022, and we’ll be bringing you coverage from the game.

Wood’s side finished first place in their group ahead of Villarreal with five wins and one defeat, so they will be looking to end the season just as strongly by going all the way in the UEFA Youth League, with tough challenges expected along the way.