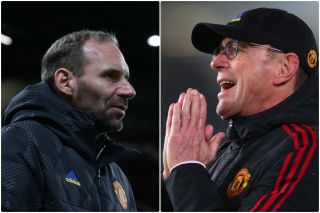 Brining Lense to United was one of Rangnick’s first decisions at United and he would have known that the team has struggled on the pitch ever since Sir Alex Ferguson retired with our most recent Premier League triumph in 2013.

Moreover, it becomes a huge concern after seeing United lead 1-0 at half-time in their last three games, only to throw that lead away on three occasions.

Burnley and Southampton both scored in the 47th and 48th minute and it’s clear that something is not quite right when the players step onto the pitch for the second half.

Lense was also Unite’s first-ever sports psychologist, which is really surprising in 2022, but it shows how the club has taken its foot off the gas in recent years.

Rangnick has revealed that work is being done to improve the player’s mindset (via Manchester Evening News).

“What I said, this is pretty obvious, if you are 1-0 up in the last couple of games, 11 out of 13, but we only won half of them, when you are 1-0 up and in three consecutive games you concede an equaliser, this also affects the mind of the players: ‘we should be 3-0 or 4-0 up and all of a sudden it’s 1-1’. It affects the mindset of the players, it’s obvious. They are human beings, not robots, which is normal.

“There are two things. Number one is we have to be more effective to score a second and a third goal and just kill the game off, this is number one, and we had enough chances to do that. Even if this does not happen, just stick to the game plan, stay solid, stay tactically disciplined, and this is the other issue we have to achieve and what I mean when I say we need to take the next step.

“When you concede that goal, we could’ve been 2 or 3-0 up against Southampton but we weren’t and if you then concede a goal early in the second-half, everybody can understand this affects the confidence of the players.

“I spoke with Sascha about that and we regularly speak about that. The only thing we can do is speak to the players one by one to improve the whole team and explain to them why we conceded the goal and what we should do afterwards to score a second or a third goal.

“The situation is pretty clear, in 11 out of 13 games since I arrived we score the first goal, 1-0 up and we didn’t win all of them. Especially in the last three games, it was very sad that we didn’t win those games, it cost us four points in the league and the next round in the FA Cup.

“I think it’s pretty obvious the players are getting the ideas across the pitch, with every game it gets better. After the Wolves game, it started with the two games against Aston Villa. Since then, the players understand and feel how and why we are doing a good job. Now it’s about doing that sustainably for the entire game and this is exactly what the next step is we have to take.

“The first-halves in the last couple of weeks have been really good, we didn’t concede a single goal in the first-halves. The next step is to raise our level, stay focused, physically, mentally, tactically, we just gave away those goals too easily. All of those goals we conceded in the second-half was just too easy and it was our own mistakes we made to let the other team score.”

It was telling again last week when David de Gea gave an interview suggesting that neither he nor the players knew what was going so wrong at United.

Now is the time for our players to stand up – and they should be listening to all of the advice given by Lense, who I think was a truly positive addition made possible by Rangnick.