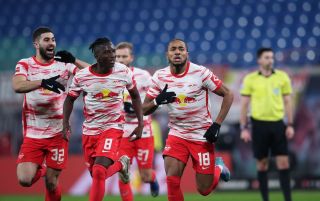 Mark Ogden has noted that Manchester United have added Christopher Nkunku to their list of summer targets, which could see the club make a move for the RB Leipzig midfielder in the summer.

The Frenchman has been linked to an Old Trafford switch, with reports suggesting that the attack-minded midfielder could be an option due to the expectation that Paul Pogba will leave as a free agent when his contract expires in 5 months.

“But sources have said that United’s interest has only emerged since Rangnick arrived at Old Trafford in December and reviewed the club’s list of potential signings,” the reliable reporter wrote in an article for ESPN.

Rangnick’s arrival was always going to open a book of fresh targets because every manager views the game differently, and he is also someone who knows the transfer market very well after helping build the Red Bull franchise across the world.

Ogden adds that, “United’s scouts have been told to increase their focus on Nkunku,” and it is noted how the 24-year-old can also play as a wide player down both flanks.

The former PSG star has enjoyed a prolific season with Domenico Tedesco’s men in the Bundesliga and beyond, scoring 29 goals and registering 13 assists in 31 appearances.

Like Jadon Sancho, you could say Nkunku is quickly emerging as one of the best prospects in the German top-flight.

Nkunku has two years left on his RB Leipzig contract.