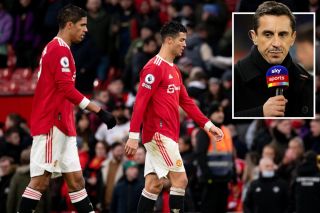 Gary Neville likes to air his views on Manchester United via his weekly podcast.

He has reacted angrily to the latest round of media claims that some of that players refer to Ralf Rangnick’s assistant, Chris Armas, as “Ted Lasso” — a fictional coach in a TV comedy series streamed on Apple+ TV.

However, speaking on his very own Gary Neville podcast on Sunday, the former United defender hit out at whoever is responsible for leaking such information to the press because it would not have happened during his time at the club.

Neville made reference to how similar it is to Chelsea back in the day.

“I thought that was downright disrespectful on Friday — I did not find it funny at all.

“That they were describing Ralf Rangnick’s number two as Ted Lasso was not funny at all and not only was it disrespectful, but I found it disgusting. It sums up what I think of them: that they are disrespectful.

“I think that if I was Ralf Rangnick and his number two, I would gain strength from that because I would not want to be on the same page of some of those players who are leaking those types of stories.

“That never happened in my time but we had the greatest level of stability.”

Neville dug deeper into how these stories are reaching the press and becoming public knowledge, adding: “I remember when I joined Sky and we had the Champions League in the early years, and I went over to Napoli to do a game involving Chelsea.

“It was when Andre Villas-Boas was their manager and he left out Frank Lampard, Michael Essien, Ashley Cole — four or give prominent players.

“That is what managers tend to do in their final days at a club, as they see it as a free hit.

“I remember sitting there at lunchtime with our team and they were getting messages of team news being leaked and the manager being slagged off, and I sat there thinking ‘does this actually happen’?

“Players’ agents and PR teams were briefing the media on a matchday about what was going on inside a club, and it was the first time I had seen it and known for it to happen – it really unnerved me.”

He also claims to know who is leaking all of this to the media.

“This is happening at Manchester United now — they are at it, the PR teams, the agents and the marketing teams, as a self-preservation for their own player.

“But what they do not realise is that unfortunately, when they go to the media then those media people go to us — so we know who is briefing.

“The reality is that we do not like it, but we know who it is.

“We are not going to throw people under a bus here because we have that journalistic respect – but they are it in the same way that Chelsea were all those years ago.

“They need to stop it and work as hard as they can.”

The players need to stop what they are doing and focus on their results and representing Manchester United the right way, as highly paid professionals of the game.

Unfortunately it seems like the dressing room reeks at the moment.