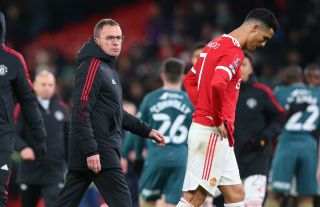 Reports suggest Cristiano Ronaldo and Manchester United interim boss Ralf Rangnick’s relationship has become fractured as the forward believes the manager is out of his depth.

The German was brought in to turn things around after the club dismissed Ole Gunnar Solskjaer in November.

But the disappointing results continue as United look to be throwing away chances to clinch a top four spot.

Obviously, it helps that Tottenham Hotspur are terrible too, but all it takes it for a team like Arsenal or West Ham to go on a run; something the Reds have been unable to do against lesser sides.

Spanish outlet AS claims Rangnick does not have the support of the squad’s ‘leading heavyweights’, one being Ronaldo, which is extremely disappointing if true.

Ronaldo has apparently questioned whether Rangnick has the ability to succeed at Old Trafford, but the report completely misses the point that he’s only come in to do a job from the dugout until the end of the season.

It sounds like an overreaction from one star player and Rangnick can only hope 1) it’s not true and 2) that the feeling is not mutual throughout the dressing room.

Gary Neville has hit out at players for leaking information like this to the press. The former United captain even said he knows the source of the constant leaks.

If only Neville would name and shame.