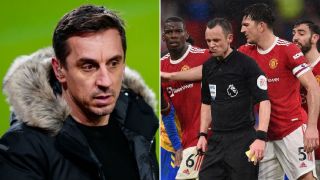 Manchester United keep making life harder for themselves in the fight for top four.

This weekend we drew 1-1, wasted many chances in front of goal, and conceded through sloppy defending. At home to Southampton…

United gave up a 1-0 lead for the third successive game and faded yet again in the second half – wasted of intensity after using it all before the interval. They seem incapable of putting in a shift for 90 minutes.

Southampton manager Ralph Hasenhuttl spoke to the media after the game and mentioned some of United’s flaws. As quoted by talkSPORT, the Austrian said: “It’s not a big secret that when they lose the ball the reverse gears are not the best from everyone.”

That is a pretty damning assessment and those who watched the game yesterday have good reason to believe Harry Maguire is one of the players he’s referring to, as seen in the photo below:

This no look defending from Harry Maguire is not getting the credits it deserves. pic.twitter.com/fsPMyqGZVA

Neville tweeted: “Imagine being a Manchester United player and having a respected opposition manager say that about you.”

They all need to look at themselves over the coming weeks and decide whether they want to be playing Champions League football next season. Time will run out quicker with every bad result between now and the end of the season.