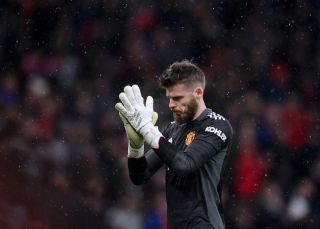 Earlier this week, David de Gea gave an interview about there being a curse on Manchester United. He wasn’t quite able to explain it but he almost stripped responsibility of the players by suggesting nobody knows why things are so bad for the team right now.

I expect answers – whether they are right or wrong – from those within the dressing room. Not a sense of being dumbfounded.

However, in a recent interview, De Gea said: “I think someone has put a curse on us or something.

“The truth is I don’t know what’s going on, I really don’t.

“People always ask me and we talk about it as team-mates and we just say ‘we don’t know what’s happening’.

“We should have competed for more trophies, bigger titles, but I just don’t know why this team doesn’t function.”

Can you picture the scene? All of the lads huddled around the dressing room, saying ‘we don’t know what’s happening,’ all feeling very sorry for themselves.

United are now three games without a win, which includes *that* FA Cup exit. Now a top four spot looks a lot less likely after dropping points in 1-1 draws against Burnley and Southampton in the last two league matches.

De Gea posted to social media after the match on Saturday and he made it very clear that he was frustrated, saying: “The situation needs to improve and fast. We have to learn that this is not enough.”

The situation needs to improve and fast. We have to learn that this is not enough. 🔴 pic.twitter.com/rldnrBURIy

But when are they going to learn because it’s been years of shortcomings? This comment just shows how far standards have dropped at Old Trafford and it reeks of mediocrity, the type of attitude that will see them playing Europa League football next season.