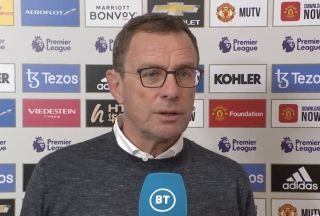 Manchester United have dropped another two points in the race to finish inside the Premier League’s top-four.

Following an abysmal 1-1 result against Sean Dyche’s Burnley earlier in the week, United would have undoubtedly been desperate to pick up all three points, especially as West Ham United and Arsenal continue to push for what appears to be the last remaining Champions League spot.

However, despite Jadon Sancho opening the scoring in Saturday’s game after just 20-minutes, Saints’ striker Che Adams pulled one back and United was unable to regain their lead – resulting in yet another 1-1 draw.

Reacting to the disappointing result at full-time, Rangnick, who spoke to BT Sport, admitted that his side was once again not at the races.

“We lost a little bit of composure and we took the wrong decisions.”

“This is just where we have to get better.”