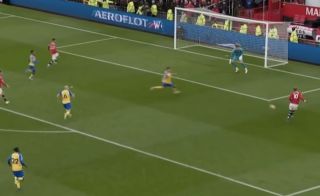 Manchester United have taken the lead against Southampton during Saturday afternoon’s early kickoff.

The Red Devils came into Saturday’s Premier League match off the back of a poor 1-1 draw against Burnley earlier in the week and would therefore have been desperate to take all three points away from Old Trafford.

Starting the game in excellent fashion, it has been Ralf Rangnick’s United who has drawn first blood after just 20-minutes.

A quick-fire counter-attacker saw wide-attacker Marcus Rashford break free of the Saints’ back line before putting it on a plate for teammate Jadon Sancho.

The Red Devils lead 1-0 and will now need to continue their impressive start if they’re to see out the game.

Jadon Sancho has his first goal at Old Trafford! 🙌

A lightning move from Man Utd as Southampton are carved open to make it 1-0 💥 pic.twitter.com/1kxbxMYd3z