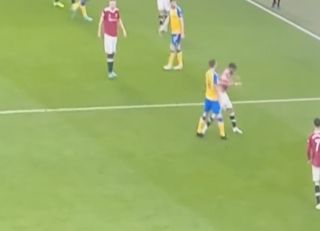 Manchester United have dropped another two points in the Premier League.

Saturday’s early kick-off saw Ralf Rangnick’s Red Devils host Southampton at Old Trafford and despite being desperate to bounce back from a recent 1-1 draw against Burnley, United was unable to claim all three points.

Although winger Jadon Sancho opened the game’s scoring after just 20-minutes, a familiar story followed as the side conceded and were unable to regain their lead.

Having now dropped another two important points in the race to qualify for Champions League football next season, one of the moments of the match came from midfielder Bruno Fernandes who was visibly frustrated.

Picked up by a fan recording in the stands, the Portuguese playmaker was seen swinging a wild punch at opposition midfielder James Ward-Prowse.

Thankfully Fernandes did not connect with Ward-Prowse but surely the sport’s decision-makers will take a dim view on this kind of on-field behaviour.