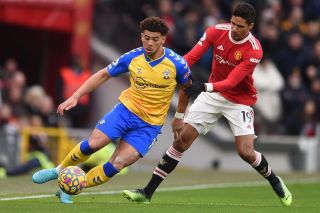 Raphael Varane says Manchester United will ‘fight until the end’ in order to secure Champions League qualification at the end of the season.

Speaking to BT Sport after the Southampton draw, the centre-back answered a question about United’s top-four hopes (via Manchester Evening News): “We never gave up and we have to fight until the end.”

However, our chances took another blow this afternoon when United were held to a 1-1 draw by Southampton at Old Trafford.

The point leaves United fifth in the Premier League after playing 24 matches, equal on points with West Ham but with a worse goal difference tally.

Now we are just one point ahead of Arsenal, who have played two games less, and four points clear of Tottenham, who have three games in hand.

It drags us to the deep end and makes everyone else’s job easier, especially when we’ve been dropping points against teams we should be beating!

Now our Champions League hopes are in serious doubt and dropping more points along the way won’t help.

“It is the second time the beginning of second half has not been good enough and we concede a goal. We had good opportunities in the first half.”