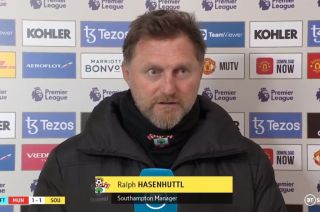 Ralph Hasenhuttl has every right to be happy with his players on the back of another impressive result away to Manchester United.

The Saints came from behind during the week to beat Tottenham Hotspur and, after trailing 1-0 at half-time at Old Trafford, Hasenhuttl’s side clinched a point.

Che Adams scored the equaliser shortly after the interval to make it 1-1.

United opened the scoring through Jadon Sancho but one goal wasn’t enough to win the match — just like it wasn’t against Middlesbrough and Burnley in recent outings.

Speaking about how Southampton have been performing, Hasenhuttl told BT Sport: “When we play our football we dominate the game.”

While I wouldn’t go quite that far with Southampton’s performance, to say they dominated the game, but they made life hard for United and wasted plenty of time in the second half.

"When we play our football we dominate the game."

"Adams and Broja are always a threat."

"The way we responded in the second half was fantastic."

United lose out on another opportunity to gain ground in the race for a top-four finish, which is looking more unlikely by the week for the Reds.

The ‘easy’ fixtures are running out and we face some of our rivals soon. That, of course, does not bode well for our Champions League hopes.