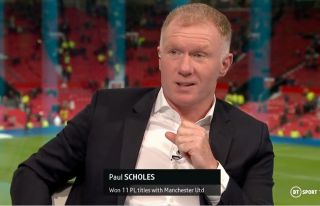 Paul Scholes thinks Manchester United are a team of individuals rather than being a well-drilled side, after drawing 1-1 with Southampton at Old Trafford.

Along with Glenn Hoddle, Scholes was in agreement that Southampton looked the better side at Old Trafford today, as the match ended in a 1-1 draw.

In the same fixture last season, however, United won 9-0 so today was a bit different. Not different in the sense that we created plenty of chances but couldn’t score enough goals to win the match.

Scholes was critical in his post-match assessment, pulling no punches, as per usual.

“It’s been a bad six or seven months,” the United legend said on BT Sport, before adding that “the season’s not been good enough.”

"It's been a bad six or seven months."

"The season's not been good enough."

"One team have got a proper Coach, the other team has a Sporting Director."

Paul Scholes pulls no punches in his assessment of where Man Utd currently stand… 😐 pic.twitter.com/PXCmh6liA2

The former midfielder was critical of Bruno Fernandes too, claiming to be unaware of what his role was against Southampton, though he did play a hand in Jadon Sancho’s opener.

Nobody here will disagree with what Scholes said about United’s performance, but he also had a dig at Ralf Rangnick.

“One team has a proper coach, the other team has a Sporting Director,” he added before criticising the decision to appoint Rangnick until the end of the season rather than an “elite” coach.

Let us know in the comments section if you agree with everything Scholesy’s had to say about the game.