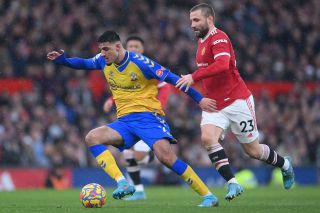 Manchester United left-back Luke Shaw fears history is repeating itself after the Reds drew 1-1 with Southampton in the Premier League on Saturday.

Another shocking result, with a decent first-half to show for it, but very little end product in the second-half to get the three points United needed.

Ralf Rangnick’s side took the lead in the first-half thanks to Jadon Sancho but fell early on in the second-half when Che Adams equalised. We suffered the same 1-1 result after 90 minutes against Middlesbrough and Burnley, but this team is incapable of putting teams away.

Shaw believes United paid the price for being wasteful in front of goal again.

“History is repeating itself again,” Shaw told BBC Sport. “We started really well the first 20 minutes, got the goal and it just happened again. We know it’s not good enough and it needs to change quickly.

“If we take our chances early in the game it’s a different story. We know we need to get better. We can’t over-think it. We want to get in the Champions League and it’s not good enough and there’s no way we will get in Champions League if we keep dropping points.

“The most important thing at the moment is results. It’s about picking up the points and we need to be climbing the table.”

Shaw has hinted that United lost confidence and composure after surrendering yet another lead for the third game in a row. Something needs to change and that may be personnel.

He told MUTV, as per the Manchester Evening News: “Because we’ve been in that situation so many times the confidence drops and the composure goes.”

Moreover, it must be becoming harder to defend Harry Maguire’s selection after each game? I’m not sure Victor Lindelof is the answer either, but he’s a better fit alongside Raphael Varane in the heart of defence.