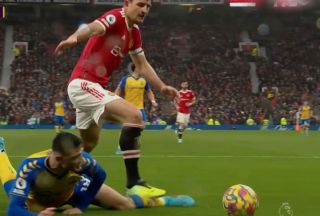 Southampton’s Armando Broja crashed the floor inside the box and did everything he could to win a penalty at Old Trafford.

The Southampton forward appeared to go down softly inside the box after some contact from Harry Maguire, who, in his attempts to shield the ball away, accidentally stood on the Albania international.

It wasn’t one of Maguire’s better games and he didn’t look to be in control of the situation with Broja either.

The Southampton forward cut in from the left flank and thought he was free after beating Maguire.

However, our skipper kept running back and finally caught up with him before the collision and unfortunate stamp.

The pressure is on Maguire every week because he always seems a moment away from making a mistake.

Thankfully, he recovered this time around. Just about!